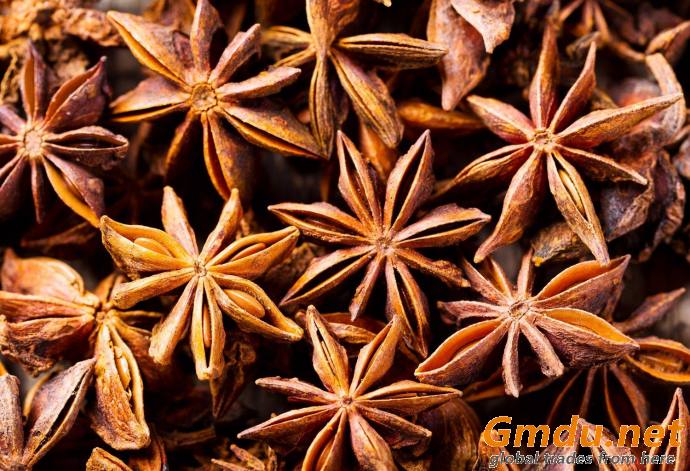 DESCRIPTION
Star Anise is the fruit of a small to medium, evergreen tree, native to south west China and now grown in Indio- china and Japan. Traditionally the Japanese used to burn the beautifully aromatic mark of the tree as incense. Yellow, narcissus like flowers yield fruits which open out into an eight- pointed star shape.USES
Star Anise is believed to be good for stomach and digestive tract ailments. Anethole it contains is regarded as cure for dermatitis. It is also used in cough medicines and added to pet foods.

Star anise is one of the most important spices in Chinese cuisine, and it is the dominant flavour in Chinese five spice powder. They use the spice in meat preparation, especially in chicken and pork. Vietnamese use it in soups made of beef. It is also used in fish scallop and clear soups. More often the whole star or part of it are used whole as in the recipe, right, for Chinese Tea Eggs. Star anise is also used as flavouring in alcoholic drinks, such as patis and anisette and in confectionery.
Contact Information
Related ProductsTastela Spices
Related Trade LeadsFood & Beverage - Other Food