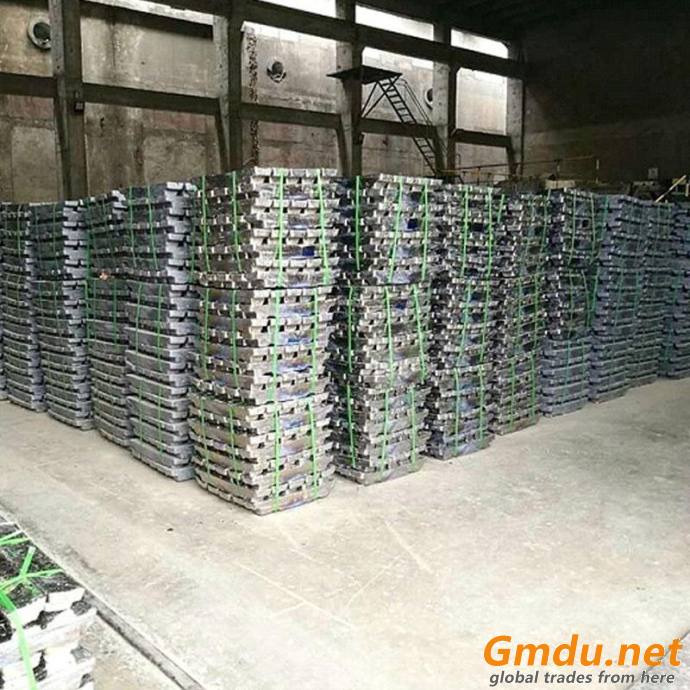 Lead ingots are rectangular, with protruding ears at both ends, blue and white metal, soft.Density 11.34g/cm3, melting point 327℃
Use
Lead ingots is mainly used in manufacturing battery, coating, warhead, welding material, chemical lead salt, cable sheath, bearing material, caulking material, pap alloy and X-ray protective material.
batteries Lead ingots are widely used in the manufacture of batteries, cables and fuse, as well as alloys and chemical pigments.Lead ingots shall be shipped by means of transport without corrosive substances to prevent them from being rained on.Lead ingots should be stored in a ventilated, dry, non-corrosive material storage room.The white, off-white or yellow-white films formed on the surface of lead ingots during the transportation and storage are determined by the natural oxidation properties of lead, and shall not be used as the basis for scrapping.
Regenerated lead is increasingly attach importance to environmental protection in recent years, strengthening non-ferrous metal resources recycling situation of emerging industries, the raw materials more than 85% from the waste battery recycling, promote recycling of resources, alleviate the pressure of the lead resource requirements, and reduce the pollution of lead, but most enterprises backward technology, high energy consumption, low lead recovery.
The formulation of the national standard of Lead Ingot supplier plays an important role in standardizing the management of recycled lead industry, perfecting the rules of market operation and promoting the development level of the industry.The formulation of national standards for lead ingots will expand the popularity and reputation of a considerable number of industrial areas in the industry, which is of great significance to promoting the development of the recycled lead industry.
History
Lead ingots is one of the earliest metals refined by humans and was discovered and used around 3000 BC.The former Egyptian dynasty (before 3000 BC) that is useful lead small portrait, three periods of Mesopotamia in Ukraine (Uru Ⅲ, 3000 years BC) has been lead into small containers or hammer into slices, China is found that the earliest henan yanshi erlitou site unearthed heels, it exists in about 3500 to 4000 years ago.In the tombs of the shang dynasty and the western zhou dynasty, lead-made jacks, cannons, zun, ding and ge were unearthed. The lead-made ge of the western zhou dynasty (11th century BC to 771 BC) contained 99.75% lead.Lead was not more common in Palestine until after the 15th century BC.However, it was not until the 17th and 18th centuries that lead began to be produced on a large scale, mainly in the United States, the former Soviet union, Japan, Germany, Britain and China.
The market environment
China is rich in batteries Lead ingots ore resources. With the increase of domestic lead demand, the mining amount of lead ore in China has reached the first place in the world.However, the concentration degree of China's lead smelting industry is relatively low. The total output of the top ten lead enterprises in China is less than 50% of the national total, and 65% of the production capacity of lead batteries is in the hands of several major manufacturers in zhejiang. The relatively concentrated consumption makes the right of discourse firmly in the hands of the buyers, so the buyer's market is an important feature of the domestic lead market.
China's refined lead output totaled 4.22 million tons in 2014, down 5.5 percent from a year earlier, according to data released by the national bureau of statistics.The output of refined lead in China from 2001 to 2014 is shown in the figure on the right:
The data also showed that China's total production of lead concentrate reached 2.997 million tons in 2014, down 4.84 percent year on year.
Lead is one of the most important base metals in the national economy. batteries Lead ingots is widely used in battery, cable sheath, automobile manufacturing, military industry and other industries.Lead-acid battery is the main consumption area of lead, and the consumption of lead accounts for more than 80% of the total demand for lead.With the rapid development of national economy, the social demand of industrial raw materials is increasing day by day. Driven by the strong demand of lead-acid battery industry, the consumption of lead in China has surpassed the United States and become the world's first.
Contact Information
Related ProductsAnyang Daguan Metal Material co. Ltd+︎
Related Trade LeadsMinerals & Metallurgy - Metal Processing Service+︎